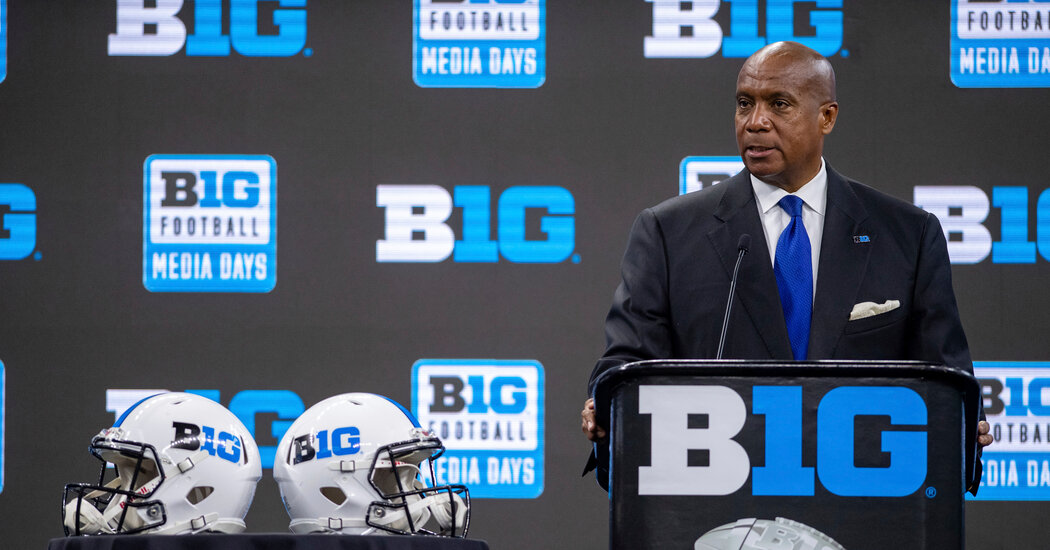 In search of a way to curb the Southeastern Conference’s swelling power, three of the wealthiest college sports leagues — the Atlantic Coast, Big Ten and Pac-12 conferences — said Tuesday that they had formed a coalition to navigate a turbulent era.

Beyond a “scheduling alliance” that could eventually produce more marquee matchups in basketball and football, the three conferences could as soon as next month upend a proposal to triple the size of the College Football Playoff to 12 teams. The conferences could also prove a crucial force as the chronically embattled N.C.A.A. contemplates a reorganization.

But the three conferences, which include 41 universities across 25 states, stopped far short of a formal merger. Instead, the union had the trappings of a speedily assembled, fill-in-most-of-the-blanks-later partnership, with the conferences pledging “a collaborative approach surrounding the future evolution of college athletics and scheduling.”

“There’s no signed contract,” Pac-12 Commissioner George Kliavkoff said. “There’s an agreement among three gentlemen and there is a commitment by 41 presidents and chancellors and 41 athletic directors to do what we say we’re going to do.”

“It will allow people to understand where everyone else stands because some of the events over the last couple of months have kind of shaken the foundation of the beliefs of college athletics,” he said.

Jim Phillips, the A.C.C. commissioner, similarly said leaders of the three conferences had felt a “responsibility to stabilize a volatile environment.”

The debut of the group, which said its member conferences “remain competitors in every sense,” came less than a month after the University of Oklahoma and the University of Texas said that they would leave the Big 12 Conference for the SEC by July 1, 2025. The decision left the SEC poised to grow to 16 schools and, more crucially for the economic landscape of college sports, positioned to command a bigger television deal than the 10-year, $3 billion agreement with ESPN that it announced last year.

And while the SEC’s expansion was a predictable threat to the Big 12, it also placed substantial pressure on the other leagues that make up the so-called Power 5 conferences that, under both the arcane and unwritten norms of college athletics, have outsize influence.

The new coalition between three of the Power 5 leagues amounts to an interim, if largely vague, response, with no clear methods to enforce its principles besides private pressure and public shaming.

In a joint interview with his counterparts after the announcement on Tuesday, Warren insisted that the absence of a signed agreement was not an effort to avoid running afoul of the antitrust laws that have been tripwires for the college sports industry.

“We’re competitors on the field; we have not made any agreements to vote in blocs or move together,” Warren said. “All we’ve said is that we want to come together and create an environment to do what’s right for the benefit of our student-athletes and our respective conferences.”

Sweeping in brand-name schools like Clemson of the A.C.C., Ohio State of the Big Ten and Oregon of the Pac-12, the group is looking to enter into more detailed strategies on matters like football and basketball scheduling, which, in turn, could affect the television rights deals that are the financial lifeblood of college athletics. The leagues said new approaches to scheduling would start “as soon as practical while honoring current contractual obligations.”

One of the group’s first tests will come in late September, when the football playoff’s power brokers are scheduled to consider a plan to expand the tournament’s size. Some executives are wary of the proposal, which executives from the Big 12, SEC, Mountain West Conference and Notre Dame developed. (Notre Dame is an A.C.C. member in all sports except football.)

On Tuesday, none of the coalition’s three commissioners committed to supporting the existing proposal — a potent signal since the playoff system relies on unanimity to make decisions about matters like expansion.

Although it does not have veto power inside the N.C.A.A., which has little control over major college football, the group could also play an important role in a potential rewriting of the association’s constitution between now and mid-January. The association, which saw its authority undercut in a Supreme Court case it unanimously lost in June, is studying whether and how it could embrace the type of “transformational change” that its president, Mark Emmert, has urged in recent weeks.

Despite the weakness of the N.C.A.A., the coalition may use whatever power it holds only so clearly: Phillips said he did not expect the three conferences to become anything resembling a formal voting bloc during deliberations about the association’s future.

The commissioners, however, left open the possibility that their ranks could grow. Kliavkoff said the Pac-12 would announce this week whether it would pursue a membership expansion. Warren did not commit to a timeline for a decision for the Big Ten, but said he felt that the new coalition already offered the league “many of the benefits that you normally only get” when conference membership rosters change.

Indeed, Phillips suggested that the coalition could go far to satisfy some of the A.C.C.’s ambitions.

“It allows collaboration without any membership adjustment or changes,” he said.

The Big 12, Warren signaled, was not invited to participate in the coalition because of its turmoil.