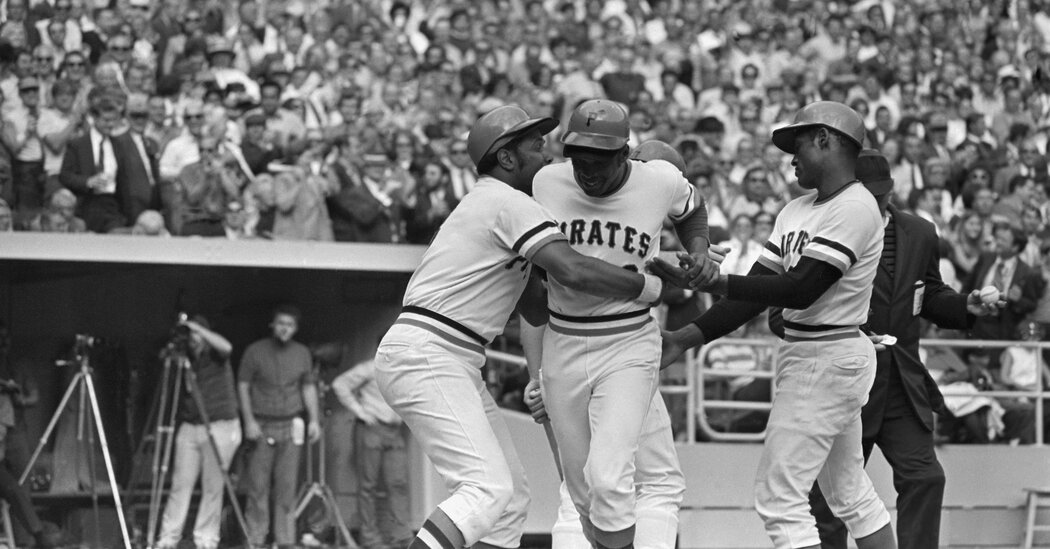 Roberto Clemente won two championships with the Pittsburgh Pirates, one when he was young and the other near the end of his brief life. For the first, in 1960, everyone else on the World Series roster was white, except for two teammates at the end of the bench. The second roster, in 1971, was much different.

Fifty years ago on Wednesday — about a month before the start of a postseason he would make his own — Clemente found himself batting third in a lineup unlike any that had come before. For the first time in the history of the National or the American League, a team fielded a lineup that was entirely composed of people of color.

“Roberto said to me, ‘Sangy, I never thought I’d see that in my life,’” said Manny Sanguillen, 77, the catcher that night. “He was proud to see nine guys playing, and he said, ‘I’m glad I’m participating in that for the Pittsburgh Pirates.’”

The Pirates will honor the legacy of that game on Wednesday by hosting a panel discussion at the Heinz History Center in Pittsburgh with Sanguillen and the three other living members of the lineup: third baseman Dave Cash, center fielder Gene Clines and first baseman Al Oliver. The team will wear commemorative T-shirts before its road game that day and will hold a pregame ceremony before its next home game on Sept. 6.

“It means a lot more to me now than it did then, because at that time, we didn’t give it much thought,” said Oliver, 74, who played first base. “The reason we didn’t is because the Pirates were always loaded with Black and Latin players, and so it wasn’t something that was really noticeable to us as players. I don’t know how it was to other people, but to us, it was almost routine.”

While Black participation in Major League Baseball has declined in recent years, the 1971 Pirates stand as an early example of the international game M.L.B. would become. In the lineup that Sept. 1 were two players from Panama (Sanguillen and second baseman Rennie Stennett), one from Cuba (shortstop Jackie Hernandez) and Clemente, from Puerto Rico.

Five others were Black Americans: Cash, Clines, Oliver, left fielder Willie Stargell and pitcher Dock Ellis. They were different in birthplace but connected in spirit.

“Some people said, ‘Latino, it’s not the same’ — but it’s not true; we’re Black,” Sanguillen said, laughing. “Like Willie said to me, ‘Your color’s even darker than mine!’”

Such brotherly ribbing was a hallmark of the Pirates in the 1970s, even as they transitioned to other stars of color like Dave Parker, Bill Madlock, Jim Bibby and Omar Moreno. The visual on Sept. 1, 1971, was unremarkable, like the game itself: a Wednesday night affair at Three Rivers Stadium against the overmatched Philadelphia Phillies before 11,278 fans.

Standing in the on-deck circle at first pitch, Phillies shortstop Larry Bowa had the same reaction as Oliver: same old Pirates, the class of the league. Baseball had been integrated since 1947, so a diverse lineup, in general, was nothing new. Twelve different players of color had won the league’s Most Valuable Player Award, including Clemente in 1966.

“You look at every one of those guys that night, and they were great players,” Bowa said. “It didn’t even enter my mind that, ‘Oh, wow, that’s different.’ I just looked at the talent out there and went, ‘Wow — pretty good baseball team.’”

Two white Pirates infielders were out of the lineup — first baseman Bob Robertson had sprained a knee, and third baseman Richie Hebner was recovering from a viral infection. But the Pirates were so deep that their manager, Danny Murtaugh, had plenty of strong options to replace them.

The first six hitters in Murtaugh’s lineup were all batting over .300 — Stennett, Clines, Clemente, Stargell, Sanguillen and Cash. Oliver, who had a .303 career average, batted seventh. Hernandez, the light-hitting shortstop, was next, followed by Ellis, who had started the All-Star Game that summer.

“I’m not saying we were intimidated, but you knew you’d better play your A game or it would be a long series in Pittsburgh,” Bowa said. “They were that much better than us. Every one of those hitters used the whole field. They hit balls hard, they could run, they could throw. And all those guys used big bats. Even the ground balls they hit to you, they came at you with authority.”

Bowa worked two walks off Ellis, helping force the Pirates’ bullpen into the game in the second inning. The Pirates would win, 10-7, and the pitching star, as The Sporting News noted, was white.

“Ironically,” the paper reported, “it took six innings of strong relief by Luke Walker, a Caucasian from Texas, to quiet the Phillies.”

The Pirates’ unique lineup was treated more as an amusing footnote than a watershed moment. The Sporting News story was a brief item tucked in the corner of a box score page. The Pittsburgh newspapers were not publishing because of a strike, and The Philadelphia Daily News made only a passing reference the next day to the Pirates’ “all-soul lineup.” A United Press International reporter took more of an interest.

“When it comes to making the lineup, I’m colorblind,” Murtaugh said in that report. “And my athletes know it. They don’t know it because I told them, but they know it because they’re familiar with the way I operate.”

Murtaugh, who died in 1976, insisted he did not even notice the racial makeup of the lineup. In that way, he was like Red Auerbach, the impresario of the Boston Celtics, who always maintained that he did not realize he had used the first all-Black lineup in N.B.A. history when he did so on Dec. 26, 1964.

“Murtaugh was a man that wanted to win, and it didn’t matter what formula he had to come up with, he was just looking at who was the best fit for that particular game,” said Roberto Clemente Jr., who was 6 years old at the time. “Obviously, it was a historic moment, but I don’t think he really even thought about it. He just wanted to have the best lineup to win that game.”

Oliver said the distinction had only dawned on him in the third or fourth inning. But Stargell — who would effectively replace Clemente as the Pirates’ leader after Clemente’s fatal plane crash on Dec. 31, 1972 — was keenly aware. In the clubhouse later, Clines said he was sure the Pirates had started “nine brothers” before. Stargell corrected him.

“This is the first time,” he said in the U.P.I. story. “Back in 1967, in Philadelphia, Harry Walker started eight of us, but the pitcher, Denny Ribant, was white.”

Stargell died in 2001, on the very day the Pirates opened PNC Park, which replaced Three Rivers Stadium. Ellis died in 2008, and Oliver eulogized him at his funeral in California. Most fans remember Ellis for claiming to have thrown a no-hitter while on LSD, or for wearing rollers in his hair. Oliver said his friend had a more meaningful legacy.

“I don’t think too many people knew that what Dock was really doing out in Los Angeles was saving lives,” he said. “Because I recall at his funeral, when I was looking out over the congregation, most of the people there were the people that he had brought out of addictions and saved their lives.”

Though he pitched only briefly that night 50 years ago, Ellis’s presence helped the Pirates do something for the very first time. Before long, Clemente would lead them to a place he had been once before: the World Series.

“He was on a mission,” the younger Clemente said. “He knew he was here for a short period of time. As he told my mother, he was going to die young, and I believe that’s how he lived his life, in a flash. So understanding that he wanted to win that World Series, that is something that needed to happen.”

The Pirates started September by symbolically flipping a league that had once been all white. They ended October as champions.