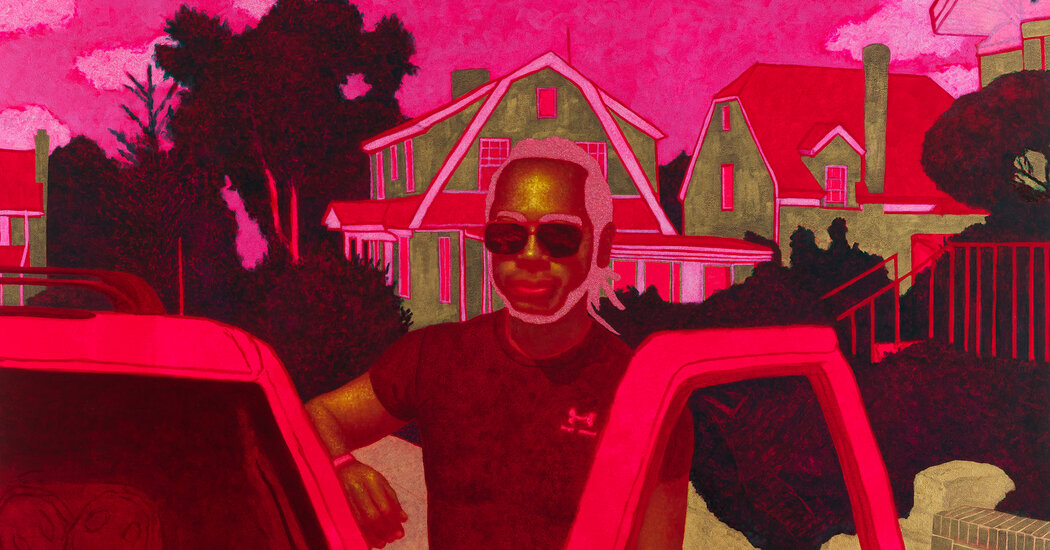 “¡Se buscan testigos!” Last year, Lizania Cruz painted this announcement — “looking for witnesses!” — on signs made of rice sacks, and posted them in urban outskirts in the Dominican Republic. Each posed a question about Dominican history and identity — Do you believe what you were taught about Christopher Columbus? Did you know that the plantain dish mangú was originated by enslaved Black people? — and provided a WhatsApp number for the public to send replies. Later, Cruz, who grew up there and now lives in New York City, brought the exercise to Washington Heights, where she pasted her appeal in bodegas, ran it in community newspapers and took to the street herself, with a prim coat and a briefcase, asking Dominican-Americans how they see their identity in each country.

The exchanges, friendly yet probing, are captured on video in “Gathering Evidence: Santo Domingo and New York City,” Cruz’s engaging field-report exhibition at CUE Art Foundation, curated by the artist Guadalupe Maravilla. The show also compiles objects that illuminate how the Dominican nationhood narrative was built, from sugarcane to record-album covers to a bewildering chart of racial subcategories.

In the room’s center, an installation of tall paper stacks — in a more abstract, sculptural language — addresses the bureaucratic violence of La Sentencia, in which some 200,000 people were stripped of Dominican citizenship because of their Haitian origins. This event was recent — 2013 — indicating how raw are the social wounds that concern Cruz, and how important the work of repair.

Cruz’s social practice is one of the most interesting going these days. “The public is always at the center,” she notes in the catalog (available free at the gallery and online, where you can also browse her testimonials). And you needn’t be Dominican — or American — to follow the QR codes in the show that invite you to apply to be a “civilian reviewer” of her research and receive a printout that tells you if you qualify.

The figures in Arcmanoro Niles’s paintings suggest something radioactive emanating from within. Their skin, rendered in cadmium-licked bronze, pulsates. Whether that’s a source of strength or roiling malignancy, they don’t seem to notice. Nor do they seem alarmed that all neutral color is bled from their world. Niles’s subjects go about their daily business — lounging at home, waiting for the bus, entering a car under an irradiated sky — with a sense of placid resignation.

They’re also Black, and the choice to render their skin tones in an unnaturally jarring palette and crown them with electric-pink glitter-encrusted hair gives them the exalted air of religious icons by way of a Lisa Frank fever dream, or a Kehinde Wiley construction where the dream has died a little. Niles’s subjects (often himself) stare through the plane with a mix of stolidness and mild annoyance, male figures often shirtless and amply paunched. They’re portraits of friends and family where trauma and regret have hardened into a callus.

Interior scenes, absent of their inhabitants, are still psychically dense: a urine sample glinting in a blue-washed public bathroom; a night stand piled with liquor bottles and sport drinks. “Don’t Think I Won’t Take a Good Thing Too Far (Maybe I’m Looking for Something I Can’t Have),” a still life of takeout containers, spent liquor minis, a money counter and a half-eaten pie is almost unbearably sad.

In that composition, there’s the faint whisper of a female figure, one of Niles’s “seekers,” as he calls them: puckish imps that creep in the corners of his paintings, brandishing shivs, rutting or both; or are more rawly defined, skeletal versions that haunt the edges of the frame, short-circuiting the classical formality. These creatures are either imperceptible to the human subjects or simply tolerated — manifestations of pure id, destructive tendencies barely suppressed, and ghosts that hang in the air.

Flags have a history as a contentious subject in art, probably because of their lasting grip on our political imaginations. In 1970, for instance, three artists were convicted of flag desecration in New York, and in 1988, Dread Scott sparked controversy by laying a U.S. flag on the ground. I thought of those incidents when seeing “Counter Flags,” curated by Natalia Viera Salgado, a co-founder of the art space Pública in Puerto Rico and a resident at Abrons Arts Center.

The exhibition is a mini philosophical inquiry into flags as symbols of nationalism, with attendant pride and critique. Edra Soto and the duo Melissa Raymond and René Sandín contribute eye-catching celebrations of Puerto Rican culture, although a version of Soto’s work, “Tropicalamerican 21” (2021), was recently and more evocatively displayed on Governors Island, where it blew in a sunroom, accompanied by music. In Jason Mena’s photo series “Failed States” (2011), a person wearing T-shirts printed with the flags of the G 7 countries buries his head — not in the sand — but in sidewalks, rubble, or a toilet, an amusing metaphor for the self-interest of wealthy democracies. Esvin Alarcón Lam’s “América Invertida (bandera plurinacional)” (2021) symbolically dissolves borders by combining the flags of countries in the Americas into a thought-provoking pink-and-white mash-up.

Kahlil Robert Irving’s “The Sentinel — (Mixed realities — defund the police)” (2021) is a sober trio of banners that serve as racial commentary: a black-and-a white one sandwiching a third for Blue Lives Matter. The work was missing when I first visited the show and later reinstalled in another spot — a mysterious move that I can’t help think suggests the power flags still have to transgress.