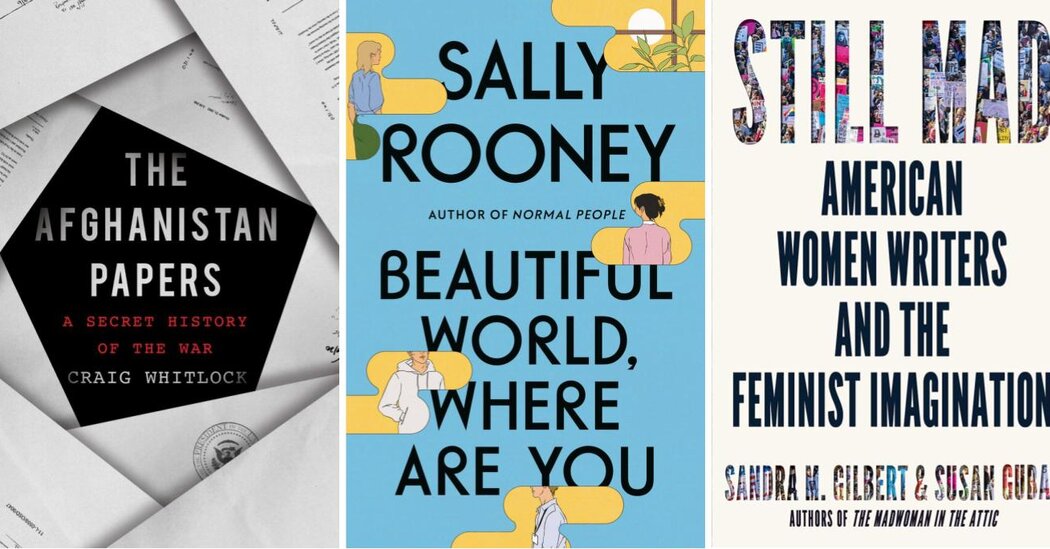 BEAUTIFUL WORLD, WHERE ARE YOU, by Sally Rooney. (Farrar, Straus & Giroux, $28.) This third novel by Rooney, after “Conversations With Friends” and “Normal People,” is about four characters, first among them Alice Kelleher, a clear stand-in for the author. It features spirited inquiries into timely social, political subjects, but Rooney’s fiction to this point remains philosophically anchored in the realms of friendship and romance. “In all three of her novels, Rooney writes directly, convincingly, hotly about sex,” our reviewer John Williams writes. “Much of the power in these scenes — and the talkier ones — arises from their riskiness. Impassioned, intellectual 20-somethings discussing their vexed feelings for one another is a road made mostly of potholes. Rooney avoids almost all of them.”

THE AMERICAN WAR IN AFGHANISTAN: A History, by Carter Malkasian. (Oxford University, $34.95.) A former civilian adviser in Afghanistan and aide to the Joint Chiefs of Staff, Malkasian has written a broad-reaching, authoritative history of America’s longest war from 9/11 to the near-present, including knowledgeable details on the Afghan part of the story. “Could it have gone differently?” Fredrik Logevall asks in his review, which considers Malkasian’s book alongside Craig Whitlock’s on the same topic (below). “Malkasian, the more sanguine of the two, identifies some missed opportunities to limit the bloodshed and cut back U.S. involvement, but concludes that Afghanistan was always destined to be a long and difficult slog, ‘something to be endured.’”

THE AFGHANISTAN PAPERS: A Secret History of the War, by Craig Whitlock. (Simon & Schuster, $30.) Whitlock, a Washington Post reporter, takes us behind the scenes to describe how America’s military and political leaders across three administrations engaged in what he calls an “unspoken conspiracy to mask the truth” about the failures in Afghanistan. “Even as American planners acknowledged — behind closed doors — that they were losing in Afghanistan, they kept up the bullish public pronouncements,” Fredrik Logevall writes in his dual review of Whitlock’s book and Carter Malkasian’s (above). “‘Lies and Spin,’ Whitlock titles a particularly devastating chapter, as he quotes general after general declaring to reporters that the trend lines pointed in the right direction, that the enemy was on the ropes, that victory would soon come. Never mind the plethora of intelligence assessments showing the opposite.”

MRS. MARCH, by Virginia Feito. (Liveright, $26.) This debut novel, a witty psychological thriller in the style of Patricia Highsmith and Margaret Millar, features a cowed, increasingly unstable Upper East Side housewife who is convinced that her novelist husband has mercilessly skewered her in his latest book. “The final pages are shocking,” Christine Mangan writes in her review, “and readers may find themselves tempted to return to the beginning in order to understand just what Feito has so convincingly managed to achieve.”

IN THE COUNTRY OF OTHERS: Volume One: War, War, War, by Leila Slimani. Translated by Sam Taylor. (Penguin Books, $26.) Loosely based on the life of Slimani’s maternal grandmother, this novel (the first of a planned trilogy) lays bare women’s intimate, lacerating experience of war and its consequent trauma. “Mathilde’s journey in ‘In the Country of Others’ is a rite of passage as much through language and motherhood as through war,” Meena Kandasamy writes in her review. “Slimani writes motherhood like no one else, and Mathilde’s subtle ambivalence toward that role is no exception.”