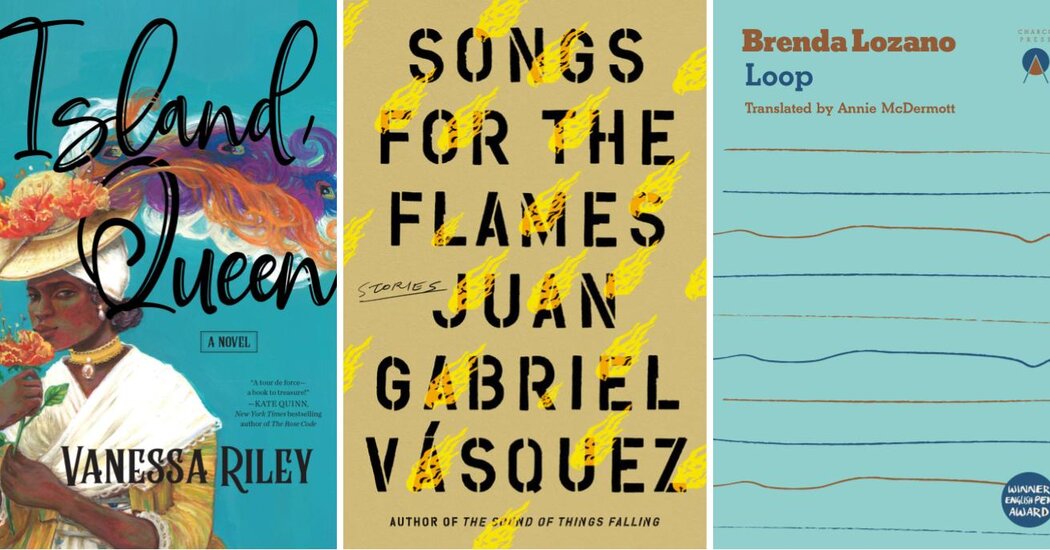 VELVET WAS THE NIGHT, by Silvia Moreno-Garcia. (Del Rey, $28.) Immensely satisfying, refreshingly new and gloriously written, this vibrant noir, set in 1970s Mexico City, traces how a dowdy secretary on the cusp of 30 sparks to life thanks to the disappearance of her beautiful and glamorous neighbor. “Moreno-Garcia mashes up Anglocentric genres with midcentury Mexican history, resulting in a brew flavored with love, heartbreak, violence, music and unsettling dread,” Sarah Weinman writes in her latest crime column. “That matters won’t end well is a foregone conclusion — this is noir, after all. But the gift of this book, and Moreno-Garcia’s storytelling, is how it imbues this well-worn genre with added strength, grace and even musicality.”

ALL THE FREQUENT TROUBLES OF OUR DAYS: The True Story of the American Woman at the Heart of the German Resistance to Hitler, by Rebecca Donner. (Little, Brown, $32.) Equal parts biography, history and thriller, this book tells the story of the author’s idealistic but doomed great-great-aunt, Mildred Harnack, who, between 1932 and 1942, helped build a network of objectors in Berlin who hoped to stop the Nazis. “Donner quotes passages from her sources at length, letting the reader dwell on facts rather than galloping through them,” Madeleine Schwartz writes in her review. “The archival quality of the book, its enumeration and cataloging of sources, is both surprising for a biography — too rarely the site of literary innovation — and affecting. It gives a sense of the warped timeline of crisis, how life can shift overnight without moving at all, the way in which change can ricochet from the political sphere to the smallest and most mundane details of a person’s life.”

EVERYTHING I HAVE IS YOURS: A Marriage, by Eleanor Henderson. (Flatiron, $27.99.) “It is a confusing time to be a woman who loves a troubled man,” Henderson writes in this unflinching memoir of her husband’s long and confounding medical conditions. She tells their story with a novelist’s eye for detail and the honesty of a trusted friend. “Yes, ‘Everything I Have Is Yours’ is an up-close look at a grisly, amorphous illness,” Elisabeth Egan writes in her latest Group Text column. “But this is also a love story and a family story, told by an accomplished novelist … who gracefully executes a triple toe loop (as a wife, a mother and a caregiver), then nails the landing with humor and a certain offbeat panache. Even if you are as squeamish and uncharitable as I am, the generosity of Henderson’s memoir will melt your icy heart.”

SOMETHING NEW UNDER THE SUN, by Alexandra Kleeman. (Hogarth, $28.) Kleeman’s novel is an unlikely amalgam of climate horror story, movie-industry satire and made-for-TV mystery, following a flailing writer who has come to Los Angeles for a film adaptation of his novel starring a tabloid-tragic teen star. “Kleeman’s dystopia reveals itself slowly, normalcy curdling in the boil,” Matthew Schneier writes in his review. “The varieties of emergency — ecological, psychological, familial, medical — are the half-hidden subject of Kleeman’s novel, burning at the periphery of what begins as a modishly detached rollick through Hollywood and its empty promises.”

THE RISE AND FALL OF OSAMA BIN LADEN, by Peter Bergen. (Simon & Schuster, $30.) Meticulously documented, fluidly written and replete with riveting detail, Bergen’s book weaves back and forth between the man and the terrorist, providing the fullest picture we have yet of Osama bin Laden. Along the way, it’s equally revealing about the Americans and their pursuit of him. “Thanks to the bravery of the SEAL team that delayed their departure from Abbottabad to retrieve computers and documents from bin Laden’s lair after assassinating him, we now have a vast trove of information not previously available,” Louise Richardson writes in her review. “Along with other primary sources, Bergen had access to the 470,000 files taken during the raid, and he uses this material lightly, writing with the lucidity of an experienced journalist.”