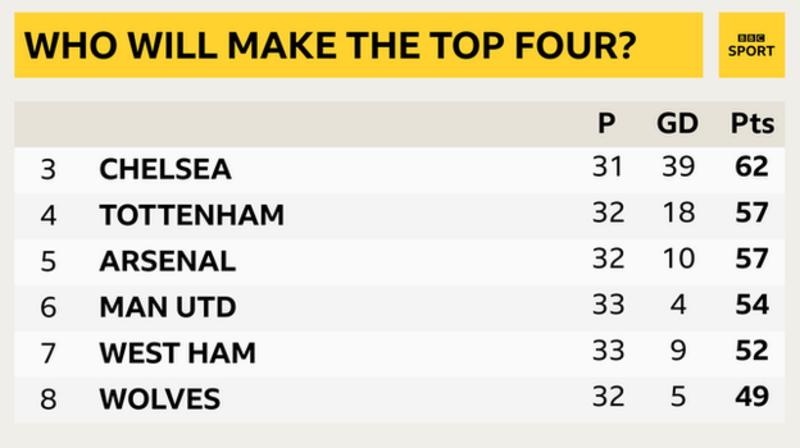 Manchester United have appointed their next manager, but will Erik ten Hag have Champions League or Europa League football to look forward to when he takes charge in the summer?

“United have a huge week coming up for their bid for the top four,” said BBC football expert and former Liverpool defender Mark Lawrenson.

“They play Arsenal on Saturday and then Chelsea on Thursday. I’m expecting a response from United after such a poor display against Liverpool but, unless we see a big improvement, they could find the gap to fourth place gets bigger, not smaller.”

Lawro is making predictions for all 380 Premier League matches this season, against a variety of guests.

This week he takes on Austin Brown, singer and guitarist with American rock band Parquet Courts and a Manchester United fan.

Parquet Courts’ new album, Sympathy For Life, is out now. The New York four-piece tour the UK in June, playing venues including Manchester’s Albert Hall and Brixton Academy in London.

One of Parquet Courts’ best-known tracks is called Total Football, but they are relative latecomers to the game, with Austin becoming a convert after becoming disillusioned with sport in the United States.

“So, when people talk about United going through a bad spell right now – well, for me that is all I have ever known.

“I never got the glory days. Instead my experience is that every season starts quite optimistic, but ends in a crisis.

“At the moment, every week is a new crisis at United, but I kind of enjoy the emotional rollercoaster of it all.

“I follow from America and there is an immense amount of press coverage – new gossip, or something to read about what is going wrong and how it can be put right.

“The running line, every year since 2013, has been ‘just one or two transfer windows, and we will fix this’.

“You see that happen at other clubs who are spending the right way but it feels like most of United’s big and expensive signings have not worked out.

“From Angel di Maria to Paul Pogba and Romelu Lukaku, these are players that should have come in and been real game-changers who inspired the rest of the squad – but instead it turns out that they just don’t fit with the team.

“Something deeper is clearly wrong at the club. Part of being a United fan is all this drama and speculation about what is going on behind the scenes, even if you just look at how we finished second last season but have fallen away so badly.

“How do you add someone with the mentality of a winner like Cristiano Ronaldo, who in my opinion is the greatest player of all time, to a second-placed team – and then do worse?”

Austin is a fan of Marcus Rashford, whose campaign against food poverty made headlines in the United States as well as the UK, and hopes the England striker can rediscover his form soon, but his all-time United hero is a more unlikely choice.

“I basically picked United from random,” he explained. “I liked talking about football when I came to Europe with the band and one of the first friends I made here was a United fan.

“When I started watching, I had to basically learn everything about football and United. I didn’t know anything and I started off just by memorising players’ names on the field and figuring out who was who.

“Wayne Rooney was there, Ryan Giggs was there – both United legends of course – but that season, the player who was obviously the most recognisable, and also the most memorable, was Marouane Fellaini.

“He was the person who, no matter how zoomed out the camera angle was, I could always pick him out. I was like ‘that’s my guy’.

“I didn’t know any history – just that this was my team. He was the new guy and I was the new guy. I could relate to him on that and I decided I was going to follow his journey – and he was legitimately my favourite player for the entire time he was with United.

“If I am being honest, I thought he was misused. He always got criticised but he was truly a weapon with his power in the air and his amazing chest control.

“He got lots of people saying he is not a United player, and I had no idea what that meant. I can understand now, because he wasn’t graceful, but I liked how he had real knack for gamesmanship – an elbow here or there. He reminded me of someone with a more American attitude towards playing the game.

“Because he was so big, he kept being put in midfield, but he is a striker – he’s like a Peter Crouch and he needs to be in the box the whole time.

“That’s what would happen in the last 10 minutes, if we needed a goal. It just became a case of ‘put Fellaini in the box and kick long balls at his head’.

“I was obviously naive to the tactics but I would be thinking if this is what you are doing to score a goal, why don’t you start the game like this? Why do you just do this at the very end when you are desperate?”