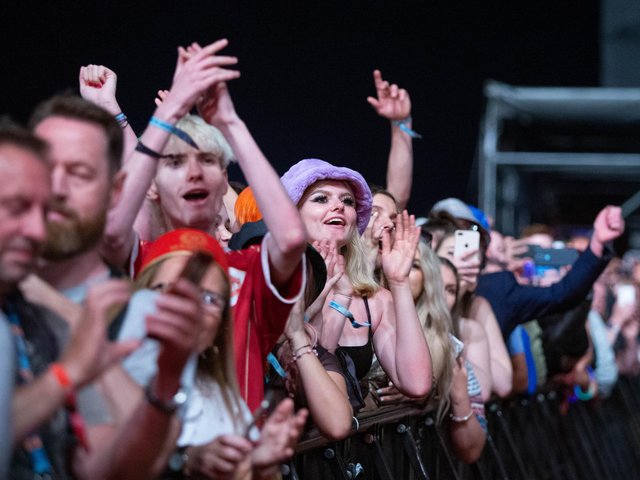 LIVE music, sea air, and lots of glitter – Victorious Festival is back, and the Southsea festival returned with a homecoming atmosphere thanks to House of Fun legends Madness.

Tens of thousands of festival goers packed out Southsea Common last night – with social distancing feeling like a distant memory – as the three day extravaganza kicked off, roaring back after the event’s cancellation due to Covid-19 last year.

With strict entry policies requiring proof of Covid-19 immunity or a negative test, huge crowds with next to no masks in sight made the event feel like a time travelling experience to a pre-pandemic world, according to some attendees.

Portsmouth-based Carl Truscott agreed: ‘It feels very good to be back – we feel at home straight away.’

Victorious Festival 2021: This is how much drinks cost at Portsmouth festival
While for others, the pandemic remains a very real concern, but the festival’s entry requirements have meant even the clinically vulnerable can relax and enjoy a much-needed big weekend out.

Dee Kidston and her sister-in-law Kirsty Kidston were enjoying their first festival after a difficult 18 months, with Dee spending three months in hospital from May due to a rare autoimmune condition.

SEE ALSO: Manic Street Preachers: “Let it just wash all that worry and anxiety away”

She said: ‘I had had my first vaccine by then, but it was still scary. I feel confident being outside here, inside I feel I need to keep myself more protected.’

For Viv Melsome, 51, and Lucy Thompson, 42, the Covid-19 policies at this year’s Victorious made all the difference when deciding whether they would come and enjoy this year’s event.

Lucy said: ‘I have a respiratory condition and I am very high risk. The Covid policies are the only reason we are here. If they didn’t have that, we wouldn’t have bothered’.

SEE MORE: 9 reasons you can be denied entry or kicked out of Victorious

Housemate Viv added: ‘This is our first big outing in 18 months. Before this we came five years running – it was awful missing it last year.’

Arms Around The Child supporter Georgia and Ellie Milner, the Southsea based founder of the charity and coordinator of Victorious’s World Music Village, said it was a ‘tremendous’ boon to be back.

Ellie said: ‘With the World Music Village a lot of the artists are not in the country – because of travel restrictions and Brexit. We have been really limited. And because of that agents have put prices up. A lot of people still can’t come because they are not top name bands so they can’t afford it. So it feels great to be able to support the musicians who have been able to be here.’

Ellie added: ‘And the festival is one of (Arms Around The Child’s) biggest donation events. We would get enough to fund one of our sites that looks after 50 children in Ghana for a year.’

But many traders reported appetites and an atmosphere less indulgent and raucous than could be expected following a year of restrictions.

He said: ‘This year has been quieter than two years ago. But I’m tentatively optimistic. People that have come down have wanted anything and everything.’

But a buzz about the day’s headlining act was unavoidable – just by scanning the Madness merchandise among the crowds, with the band’s logo stamped on red fezzes with a yellow trim.

Pete Kempster, from Surrey, had picked up one of the exotic hats and was looking forward to the first headliner of the weekend.

His fez-less friend Chuck was less keen, saying: ‘You couldn’t pay me £100 to wear that.’

Saturday will see performances from Blossoms, Rag N Bone Man, and The Streets.