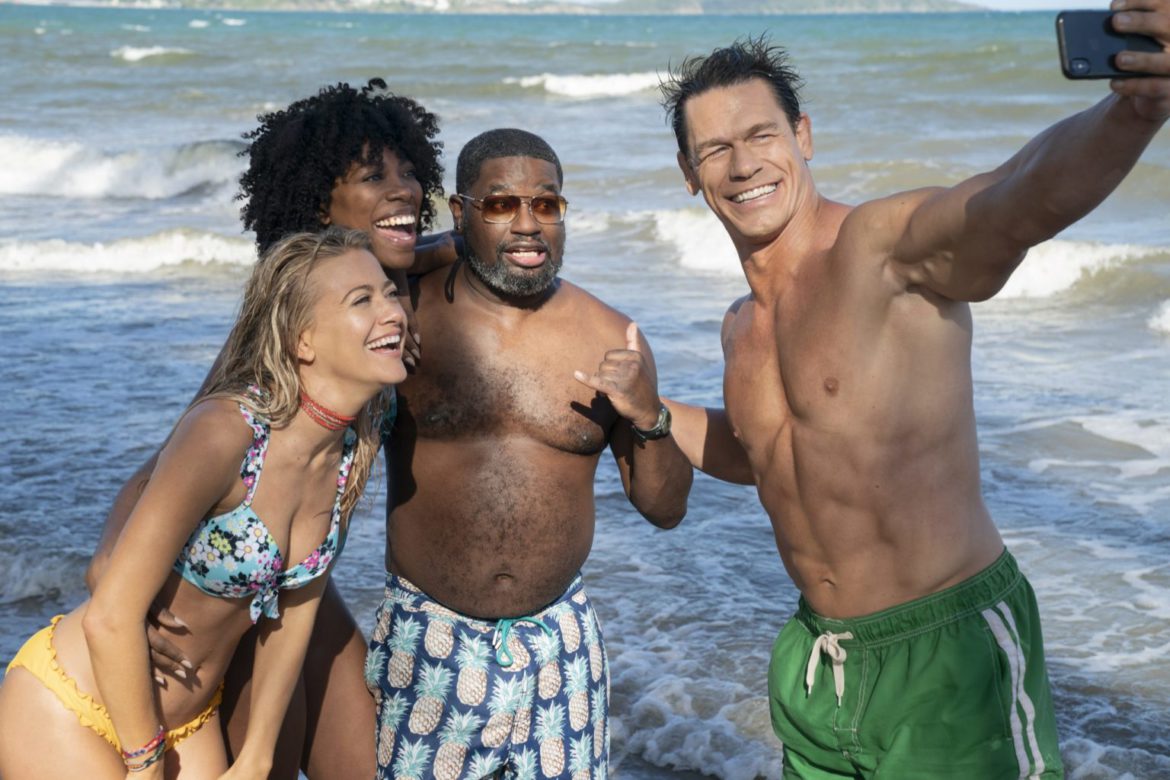 Clay Tarver’s Vacation Friends, unfairly shunted off to Hulu perhaps out of fear that folks laughing too hard would spread the Delta variant to others in the theater, is the kind of wonderfully low-effort yet quite funny romp that used to fill multiplexes every other week in the ’90s and ’00s. It’s not particularly stylish, aside from a few well-executed flourishes every now and then, nor is it impeccably written (there are five credited writers on the project, each of whom feels like they’re playing exquisite corpse with any given scene), and you will probably not be shocked by the particular pathos it attempts to evoke in its later acts nor by its resolution. What it is, however, is funny, mostly due to the efforts of John Cena, who is slowly becoming the pro wrestling world’s gift to comedic cinema, and is one of the genuinely funniest non-stage comics working in Hollywood today. There’s something endlessly amusing about the honest amiability of his presence — a sort of well-meaning and smart dumbassery offset by a jovial and caring nature — that works as a smart contrast to a persona of someone like Will Ferrell, who is, perhaps, the darker and more petulant manifestation of that same impulse (if you want to go “darkest,” you probably could put Sandler in here too).

Yet it wouldn’t work as well if he weren’t paired up with decent co-stars or, perhaps, was the film’s lead. That honor goes to Lil Rel Howery, who plays Marcus, a construction company owner who is looking to marry Emily (Yvonne Orji), the girl of his dreams who comes from a very different background than he does. While she’s cool as hell, her family is as socially rigid as they are rich, and they often remind Marcus of his place in the world — he’s a construction worker, not a businessman, even though anybody with eyes could see that he is. But that’s not going to get in the way of his proposal, which he’s tried to make as special as possible by booking an island getaway with a huge suite and lavish decorations. Of course, all that goes to hell, and soon enough the pair of them are almost headed out to a one-star motel on the island when a pair of free-spirit guests stop them and try to help them out. They are Ron (Cena) and his girlfriend Kyla (Meredith Hagner), a pair of screwball-styled bon vivants who live life to the fullest, though they’re nursing some amount of pain in their own right. The foursome has a crazy weekend, full of crashed boats and island wedding ceremonies and drunken William Tell games, and when they head off to the airport on the last day, hungover and aching, Marcus and Emily assume that that’s the last they’ll ever see of those two nuts.

Oh, how wrong they are. Months later, when Marcus and Emily are preparing for their wedding at the big country club outside of Atlanta that Emily’s folks are demanding that they have, Ron and Kyla show up uninvited and start making mischief. It’s a benign sort of mischief, of course, meant to build up Marcus and Emily before their big day — betting hard on golf games so that Marcus can embarrass his brother-in-law, helping Emily’s grandmother with all of the ailments she suffers from by using some off-the-beaten-path treatment, and ensuring that relations between the families stay cool no matter how wild stuff gets — but there are some mysteries remaining whose solutions might blow up the entire wedding. Marcus remembers some strange moments from that booze-and-blow-fueled last night of their trip, including potentially having sex with Kyla. And so when she reveals to the group that she’s pregnant and that Ron is infertile, Marcus freaks the fuck out and nearly blows everything up.