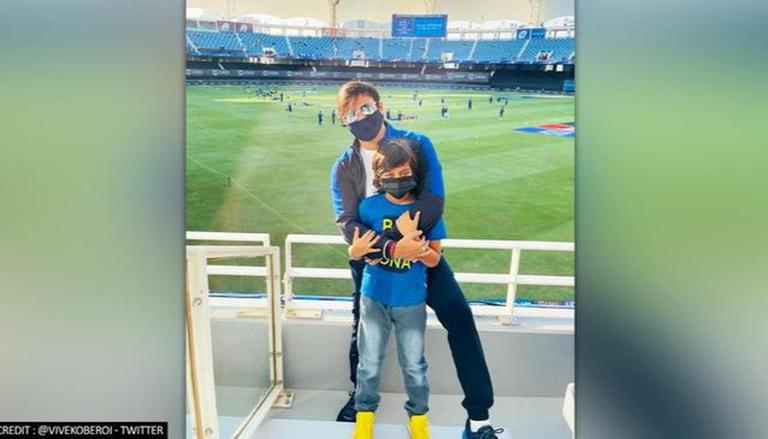 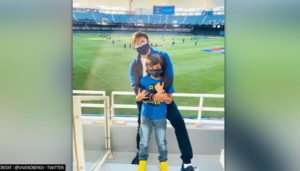 In an exciting update for all cricket buffs across the country, the second phase of the much-anticipated Indian Premier League (IPL) 2021 commenced today, with fans witnessing Chennai Super Kings (CSK) and Mumbai Indians lock horns. The cricket fever has been buzzing among several celebrities including Vivek Oberoi, who is present in Dubai with his son Vivaan Veer Oberoi to witness the magic.

The Saathiya actor took to his social media handles on Sunday, September 19 and shared a glimpse from the ‘super day’, posing with his son in the stadium. The father-son duo looks adorable in similar blue outfits with Vivaan’s neon yellow shoes stealing the show. The second phase of IPL 2021 has commenced after a long gap of more than four months.

Vivek Oberoi spends ‘super day’ with son at IPL
Posting the sun-kissed photo of the duo, Vivek wrote, “Having a super day and some father-son time at IPL today!”. While Vivek is sporting a blue-toned jacket with striking reflectors as he hugs his son, Vivaan is clad in a blue t-shirt and denim. Take a look.

The actor also took to his Instagram stories recently, chanting ‘Mumbai, Mumbai’ as the duo witnesses the intense face-off. In another video, they can also be seen hailing Mumbai’s winning streak. “Two Overs, Two Wickets, Mumbai”, he added.

Vivek Oberoi has also been making headlines recently as his Narendra Modi biopic is set to stream on MX Player from September 23 onwards. The announcement was made on the occasion of PM Modi’s 71st birthday. The streamer also dropped the trailer of the film and wrote,”Dekhiye humaare Pradhan Mantri, Shri Narendra Modi ji ki kahaani (Watch our PM Shri Narendra Modi’s story) in ‘#PMNarendraModi,”.

More about IPL 2021
IPL 2021’s second phase will majorly be played across three venues in Dubai, Abu Dhabi, and Sharjah. The 14th edition of the IPL was initially postponed in May after several players and support staff members returned COVID-19 positive tests post which the venue was shifted keeping in mind the safety and security of all stakeholders. The streak of interesting matches will be aired on Star Sports Network as well as Disney+Hotstar will broadcast them live.