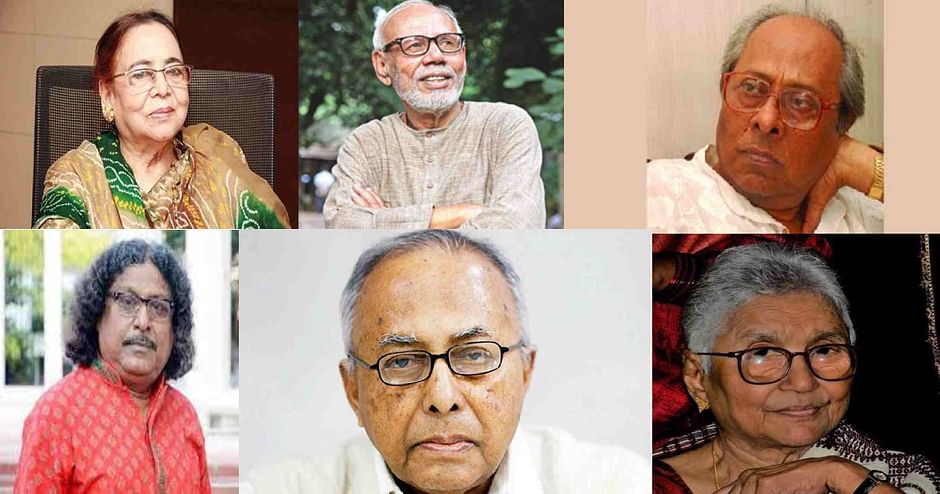 As Rabindranath Tagore once said “Let life be beautiful like summer flowers and death like autumn leaves” – the time of the year back once again, as it always goes back and forth every year when the nation remembers those who departed from their families and admirers to answer the ultimate call.

Sadly, due to several reasons and especially the still raging Covid-19 pandemic, many of the passionate and respected individuals in the entertainment and cultural arena of Bangladesh bade their final adieus to the world during the past twelve months in 2021.

These legendary figures have dedicated their eventful lives to the betterment of Bangladeshi culture; and because of their lifelong contributions, today Bangladesh is well-known and respected among the global community of culture and entertainment, in the genres of Literature, Art, Cinema, Television, Theatre and Music.

This article fondly remembers all eminent and legendary figures that Bangladesh has lost throughout this year, categorized based on their individual and respective genres.

The rueful adieus started with the departure of the Ekushey Padak winning legendary novelist Rabeya Khatun, who passed away on 3 January at the age of 85 due to old-age complications.

Bangla Academy, the oldest and dedicated organisation promoting Bengali literature in the country, has lost many of its guardian angels this year including two of its immediate past chairmen, professor Shamsuzzaman Khan (81) who passed away on 14 April after his failed battle with Covid-19, and national professor and renowned Nazrul researcher Rafiqul Islam (87) on 30 November.

Meanwhile, the immediate past director general Habibullah Sirajee (72) also left the world on 24 May.

Sheikh Abdul Hakim, popularly known as the ghostwriter of superhit spy thriller series ‘Masud Rana’, breathed his last at the age of 75 on 29 August after losing his long battle with bronchitis. Renowned Bangladeshi publisher and founder of the University Press Limited Mohiuddin Ahmed left the earth on 22 June.

Cinema
Ekushey Padak and National Film Award-winning legendary Bangladeshi actor ATM Shamsuzzaman passed away on 20 February this year at the age of 79, while another silver screen legend and member of parliament Sarah Begum Kabori breathed her last on 17 April after losing her battle with COVID-19 at the age of 70.

Another actor from Bangladeshi’s ‘Golden Era’ of cinema Mesbahuddin Ahmed, popularly known by his stage name Wasim, passed away the very next day.

The former ‘Mr East Pakistan’ breathed his last at the age of 74 due to old age complications, while veteran director Shafiqur Rahman, known for his famous movie “Dhaka 86,” died on 2 September at the age of 70.

A large group of known faces from the television and theatre arena left the world this year, starting with actor and freedom fighter Mujibur Rahman Dilu (69) on 19 January.

Ekushey Padak-winning actor SM Mohsin (73) passed away on 18 April due to Covid-19, while Jahangirnagar University Drama and Dramatics Department co-founder, professor and playwright Afsar Ahmed (60) died on 9 October due to cardiac arrest.

The month of October was a horrific month this year, as a handful of prominent personalities passed away on this month.

Due to Covid-19 related complications, veteran actor and current state minister for cultural affairs KM Khalid’s elder brother Mahmud Sajjad passed away on 24 October, at the age of 73.

2021 snatched away many of the legendary personalities from the music industry in Bangladesh, starting with legendary music maestro and trainer of classical music, ustad Sanjib Dey (68) who passed away on 28 January following a cardiac arrest.

Jane Alam, one of the last remaining pop legends, passed away on 3 March due to Covid-19, at the age of 65. A tragic road accident in Chattogram’s Mirshorai brutally took away the lives of renowned percussionist Hanif Ahammed (41) and drummer Partha Guha (50) on 13 March.

Freedom fighter and Swadhin Bangla Betar Kendra artiste Anup Bhattacharya (77) passed away on 6 May, while noted lyricist Fazal-e-Khuda, known for writing the song “Salam Salam Hajar Salam” which boosted the spirit of freedom fighters during the 1971 liberation war, died of Covid-19 on 4 July at the age of 81.

This year, Covid-19 also snatched away another folk and pop legend, the “Gono Sangeet” pioneer Fakir Alamgir who passed away on 23 July at the age of 71.

Apart from all these legendary figures, some other renowned personalities also left the earth this year, leaving behind their families and admirers.

Ekushey Padak winning veteran journalist-dramatist-poet Rafiqul Haque (85) ‘Dadubhai’ passed away on 10 October; another Ekushey Padak winning late artist Qayyum Chowdhury’s wife artist Tahera Khanam passed away at the age of 86 on 1 November and eminent British journalist Simon Dring, known for reporting the horrors of Bangladesh’s War for Independence from Pakistan in 1971 and later changing the landscape of Bangladeshi television industry as the managing director of Ekushey Television, passed away on 16 July in Romania at the age of 76.