There are fears a Melbourne anti-lockdown protest and people delaying testing across the state could lead to a worsening of Victoria’s growing COVID-19 outbreak.

Key points:
Authorities say a concerning number of people have delayed getting tested, despite having symptoms
Epidemiologist Catherine Bennett says there is a real risk of spread from Saturday’s protests
Contact tracers are focusing on downstream infection but a number of mystery cases remain unlinked
A statewide lockdown came into effect yesterday afternoon, bringing regional Victoria back into line with Melbourne’s strict stage 4 restrictions.

The number of active cases of the illness rose to more than 400 on Saturday, with 44 per cent of those under the age of 19.

At least 21 cases of COVID-19 have been detected in Shepparton in north-east Victoria, with multiple exposure sites emerging in the regional city and in Ballarat.

They include the Greater Shepparton Secondary College, a “super school” that will soon become Victoria’s largest.

COVID-19 response commander Jeroen Weimar yesterday confirmed some members of the cluster, which is spread across at least three households, had shown symptoms for days before being tested — a trend being seen across many of the state’s new cases.

“We are seeing too many people waiting too long to get tested … we need to see people getting tested at the beginning of their infectious period, not a week or so in,” he said.

A $450 isolation payment is available to workers who miss out on pay due to getting tested.

LIVE UPDATES: Read our blog for the latest news on the COVID-19 pandemic
A further $1,500 is available for people who contract the virus or who have to quarantine for a full 14 days as a close contact. 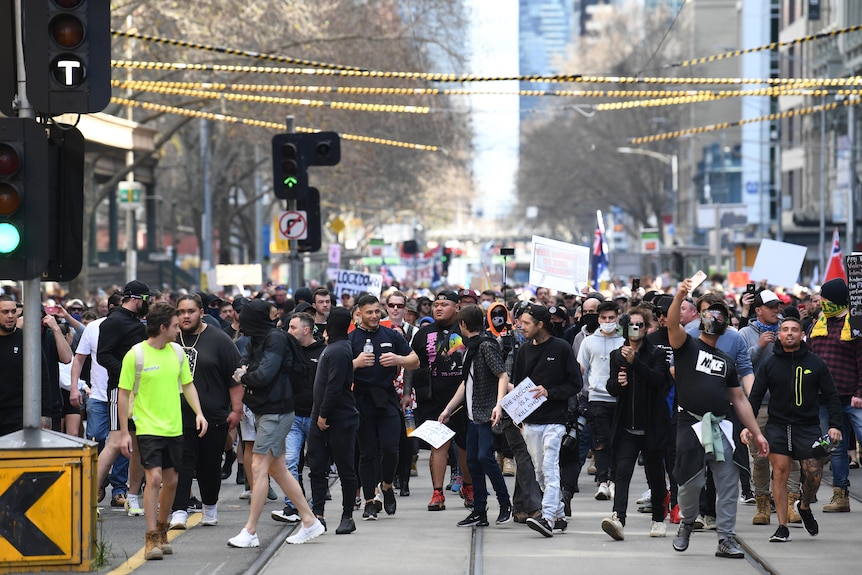 Victoria’s push for more COVID testing
A screenshot of a video, with a woman sneezing.
The message behind a new campaign is not new to lockdown-weary Victorians, but comes as authorities warn there may be virus spreading undetected in the community.

Read more
Deakin University epidemiologist Catherine Bennett said the Delta strain was already “really hard to get on top of” if people were tested straight away.

Professor Bennett said the lockdown meant most people who were not essential workers had limited contact with others.

“But if you’re out in the community doing those basics, whether it’s grocery shopping or exercise, and you are doing that for a week or more while you’re infectious, then we still have a real risk of spread,” she said.

The source of infection for a number of mystery cases is still unknown, suggesting the virus is circulating undetected, but Mr Wemair said as the outbreak grew, contact tracers’ efforts needed to be downstream, rather than upstream.

A large crowd of protesters.
Many of the protesters at Saturday’s demonstration were unmasked.(AAP: James Ross)
An anti-lockdown protest in Melbourne’s CBD on Saturday afternoon, attended by thousands of mostly maskless protesters, has further fuelled concern about the spread.

“We’re at a really critical point in this outbreak anyway,” Professor Bennett said.

“We don’t even know where the virus is in the community, we’re still finding new cases pop up in places.

“And, and the reality is even outdoors, you can see transmission … [if] people weren’t conscious of the rules, weren’t wearing masks, were too close together, then there is a very real risk of seeing transmission.”

The protest turned violent, with more than 200 of the 4,000 attendees arrested.

Victorians weigh ‘significant risk’ as regions crash back into lockdown
Hospo pic
A mix of surprise, stoicism and anger greets the snap regional lockdown as case numbers go up in Shepparton.

Read more
Professor Bennett said she hoped protesters would get tested if they had symptoms “whatever they think about the lockdown”.

“I don’t think people at the protest want other people to get sick, and they don’t want the lockdown to go on longer, because they themselves might have helped spread the virus in the community,” she said.

Professor Bennett said it was going to be a “tough month” ahead for Victorians.

But she said the state could still “break the back of this”, which included continuing to be vaccinated.

There are more than 80,000 unfilled vaccination appointments for the coming weeks, with about two-thirds of those allocated for people eligible for Pfizer.

Read more about the vaccine rollout:
Why some people feel lousy after the COVID vaccine and others don’t
NSW will soon hit a milestone in its vaccination race that could slow the spread
Strain on hospital system
A number of patients and staff at the Royal Melbourne Hospital have tested positive for COVID-19.

Entire teams of healthcare workers have been furloughed after exposure to COVID-positive patients on wards. The hospital said extensive contact tracing and testing of affected staff and patients is underway.

A positive case also attended the Werribee Mercy Hospital on August 19, sending about 50 workers into isolation.

The union representing Victorian allied health professionals said the state’s health system was at risk of collapse if coronavirus infections were not controlled.

“Even before COVID started, before the pandemic hit us, we were running the health system on a fairly lean level of staffing,” he said.

“And the impact of COVID, with staff being furloughed, with the staff being infected, being infected in the workplace, has meant we’re facing situations where services are being compromised and that’s a real concern.”

Elective surgeries are still running, but Premier Daniel Andrews warned on Saturday that could change.