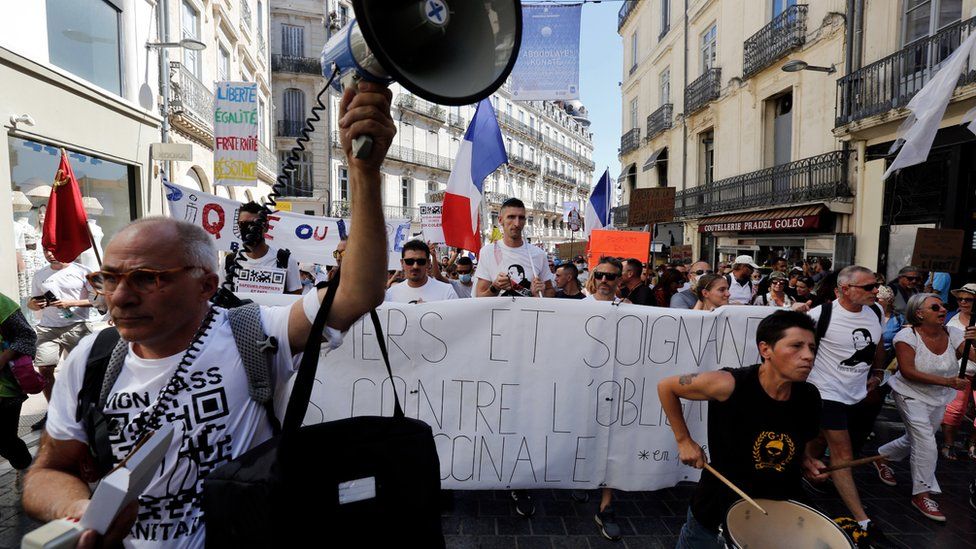 About 3,000 health workers in France have been suspended because they have not been vaccinated against Covid-19.

A new rule, which came into force on Wednesday, made vaccination mandatory for the country’s 2.7 million health, care home and fire service staff.

But French Health Minister Olivier Véran said on Thursday that “most of the suspensions are only temporary”.

Many are now agreeing to get jabbed because “they see that the vaccination mandate is a reality”, he said.

The rule applies to all doctors, nurses, office staff and volunteers.

President Emmanuel Macron first gave workers notice of the rule change on 12 July, warning them that they needed to get at least one jab by 15 September or resign from their jobs.

“I am aware of what I am asking of you, and I know that you are ready for this commitment, this is part, in a way, of your sense of duty,” he said at the time.

After the president’s announcement, Doctolib, the website people use to book their jabs, crashed as so many people tried secure appointments.

But with the mandate now in place, and thousands still refusing to get the vaccine, there are fears of a disruption to healthcare services.

In just one hospital in Nice in southern France, for example, almost 450 workers have been suspended – sparking protests outside the building.

And in another southern city, Montélimar, one hospital confirmed that it had already begun cancelling non-urgent operations because of a shortage of vaccinated anaesthetists, AFP news agency reports.

“We have to keep these people on the job until they have been replaced,” Christophe Prudhomme, an emergency doctor and left-wing MP, said.

But Mr Véran told French RTL radio on Thursday that “the continuity of care and the security of care and quality of care were assured yesterday in all hospitals and medico-social facilities”, although a few services, such as MRI scans, were impacted for a few hours.

He added that the suspensions mainly affected support staff, and “few white coats”. There have also been “a few dozen resignations” across the country, he said.

image captionUnvaccinated workers at the Pasteur hospital in Nice have been protesting outside the building
When the vaccines were first rolled out globally, France was one of the most vaccine-sceptical countries in the world.

Then, about 40% of eligible people said they planned to get immunised, according to a survey by Ipsos. At the same time research from BBC Monitoring found that the number of followers of French-language pages sharing anti-vaccine content grew in 2020, from 3.2m to almost 4.1m likes.

But since the introduction of a Covid “health pass” in July, France has become one of the world’s most vaccinated countries.

Almost 90% of all adults have now had at least one jab. France has also started vaccinating children aged 12 and over, and is administering booster jabs to vulnerable people.

Italy is also making an anti-Covid “green pass” mandatory for all employees from 15 October, meaning that workers who can’t show proof of vaccination or a recent negative Covid test will be penalised.

“The government is ready to speed up on the ‘green pass’… (for) not just the public sector, but private too,” regional affairs minister Mariastella Gelmini said on Wednesday.

The green pass is already required for anyone in Italy who wants to eat indoors at restaurants, go to cinemas and sports stadiums, and take certain public transport or flights. It is also already mandatory for teachers.

The vaccine misinformation battle raging in France
Why is the US falling behind with its vaccinations?
How Covid passports work around the world
In Greece, unvaccinated public and private sector employees have to have Covid tests once or twice a week, at their own expense. The rule came into force on 13 September.

And last week, the US made vaccines mandatory for federal government workers and contractors, and for all businesses with more than 100 employees. The rule affects covers about 100 million workers.

US President Joe Biden warned that if people didn’t get vaccinated, they should be prepared to undergo weekly testing for Covid-19.

“This is not about freedom, or personal choice, it’s about protecting yourself and those around you,” he said as he unveiled the plan.