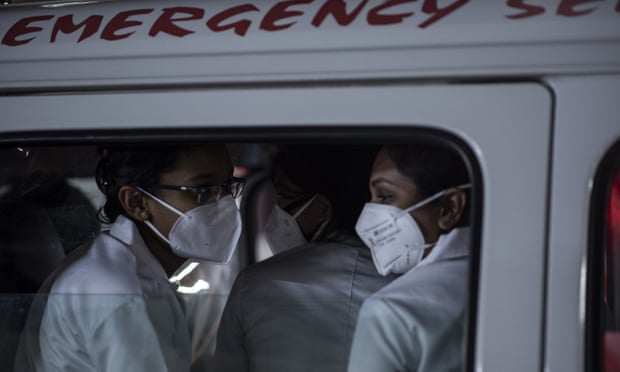 An unvaccinated teacher in a California elementary school infected half her students and 26 people in total when she contracted the Covid-19 Delta variant, researchers for the US Centers for Disease Control and Prevention (CDC) found.

The researchers said the teacher attended school for two days despite displaying symptoms of Covid-19, and read aloud to her class without a mask during that time. Infections corresponded to the classroom’s seating chart, with the students sitting closest to the teacher the most likely to be infected.

Unvaccinated teacher infected half her students with Covid, CDC finds
Separate figures published by the Office for National Statistics show there have been 156,000 deaths registered in the UK where Covid-19 was mentioned on the death certificate.
As of 9am today, there had been a further 32,406 lab-confirmed Covid-19 cases in the UK, the Government said.

The Government has said a further 133 people have died within 28 days of testing positive for Covid-19 as of today, bringing the UK total to 132,376, reports PA.
That’s it from me, Léonie Chao-Fong, for today. Here’s a quick roundup of what’s been happening so far:

Japan’s health ministry said it was investigating after two men in their 30s died after receiving Moderna jabs that were among batches later suspended following the discovery of contaminants. The ministry said there was no evidence that the shots taken by the men contained contaminants.
The Delta variant of Covid-19 doubles the risk of Covid hospitalisation compared with the previously dominant Alpha variant, a new study has found. The analysis – based on data collected in England – suggests that outbreaks of the Delta variant are likely to put an additional strain on health services.
Vietnam reported 12,103 new cases and 352 further deaths on Friday, the majority of which were in Ho Chi Minh City and its neighbouring industrial province of Binh Duong.

India has administered more than 10 million vaccine doses in 24 hours, as it prepares for a predicted surge in infections. The country reported 46,759 new Covid cases on Saturday, the highest daily number of recorded cases in nearly two months.

The Australian state of New South Wales recorded 1,035 new cases on Saturday – the highest daily total for any Australian state or territory since the pandemic began. Figures obtained by Guardian Australia show a huge gap between Covid vaccination rates of Indigenous and non-Indigenous people in every region of the state
The outbreak in neighbouring New Zealand has also worsened, with 82 new cases reported on Saturday. It brings the total number of cases of the community outbreak to 429, 415 of which have been in Auckland.

Tennis fans aged 12 or over will be required to show proof of Covid vaccination in order to attend the US Open, tournament officials have confirmed.

The tournament did not originally require any proof of vaccination or a recent negative test for fans to enter. Attendees were also not required to wear a mask.

Stricter protocols were only introduced after tournament officials came under pressure from New York’s mayor, Bill de Blasio, and other city leaders.

On Friday evening, the tournament announced on Twitter that proof of at least one vaccine shot would now be required for entrance to the grounds for all fans aged 12 and older. Masks will not be required.

As September approaches, employers are increasingly asking workers to come in, with many offices adopting hybrid systems after months of working from home – prompting mixed emotions. Commuting can be both expensive and polluting. UK workers pay more of their salary in commuting costs than their EU counterparts, and before the pandemic, two-thirds of people travelled to work by car. Despite the costs, which also include time, some value the commute for separating their home and work lives.

Seven people speak about how their commutes and their perspectives on travelling to work have changed since the onset of the pandemic.

Universities across the country are planning to hold in-person events for first-year students next month for the first time since 2019.

Professor Susan Michie, director of the centre for behaviour change at University College London, as well as a member of the government’s Covid-19 behavioural science team and part of the Independent Sage group of scientists, said that even if freshers’ events were held outdoors, there would still be a “high risk” associated with them.

Freshers’ fair week will have the potential for being a superspreader event, and however much universities pay attention to making it as safe as possible, it’s the behaviour of people that won’t be known.

Danny Altmann, professor of immunology at Imperial College London and a member of the Sage immunology taskforce, echoed Michie’s predictions. He said that despite the vaccine rollout, the UK was in a “way, way worse situation than we were last August heading into autumn” as schools and universities prepared to go back.

So if I imagine vast numbers of kids getting together in halls of residence and in freshers’ week parties, I think how can one not predict that will lead to very large spikes in numbers?

Here’s some more detail on the story that Japan is investigating the death of two men who received jabs from batches of Moderna’s Covid-19 vaccine that were suspended from use due to contamination.

The men aged 30 and 38 died earlier this month after getting their second Moderna doses from one of three manufacturing lots suspended by the government on Thursday after several vials were found to be contaminated, the ministry said in a statement.

The ministry said the cause of death was still being investigated and “currently, causal relations with the vaccinations are unknown”.

Both men contracted fever after receiving their vaccinations and neither had underlying health conditions or allergic history, the ministry said.

The Italian island region of Sicily will soon be placed under coronavirus restrictions – the first time in two months that such measures have been reimposed on a regional level.

Italy’s health minister, Roberto Speranza, announced he had signed a new ordinance bringing Sicily under “yellow” zone restrictions, meaning people must wear a mask indoors and outdoors and restaurant diners will be limited to groups of four. The rule change is expected to take effect from Monday.

Since the start of summer, all regions in Italy had been classed at the lowest risk level “white”, but the spread of the highly contagious Delta variant has sparked concern. Sicily currently has the highest number of people in hospital and in intensive care.

Sudan has received a shipment of 218,400 doses of the Oxford/AstraZeneca Covid vaccine as a donation from France, the health ministry and Unicef said.

The vaccines were delivered through the UN-backed Covax facility. In March, Sudan received an initial 820,000 doses of the AstraZeneca vaccine through Covax and Unicef.

Sudan received 606,700 doses of the Johnson & Johnson vaccines as a donation from the US earlier in August, Reuters reports. The country has also received a number of doses of the Chinese Sinopharm vaccine.

In a statement, Unicef said:

The vaccinations come at a critical time as the infection numbers are climbing while the country is preparing to re-open schools after three years of numerous interruptions.

As of Thursday, Sudan, with a population of 42 million, has officially recorded 37,699 infections and 2,831 deaths since the start of the pandemic. However, this is widely believed to reflect only a fraction of the actual numbers.

A study published late last year by scientists from Imperial College London’s Covid-19 response team in Sudan found that only about 2% of Covid deaths in the capital, Khartoum, had been reported.

Megan, a 30-year-old from rural Nebraska in the US, feels torn. She hasn’t been vaccinated against Covid-19, but if left to her own devices, things would be different. She worries about what would happen if she caught the virus and passed it on to her toddler daughter, whose history of health complications includes hospitalisation for lung problems.

Megan feels a responsibility to protect her child. But she also doesn’t want to keep secrets from her husband – who, along with his mother, is adamantly against the vaccine for political reasons.

As she figures out how to protect herself and her daughter without inciting major family conflict, Megan admits that her husband’s reliance on conspiracy theories he learns from like-minded friends or social media posts has made it difficult to trust him. Especially now.

“Had we been dating during the pandemic, this may have been a dealbreaker,” she says.

Though the percentage of Americans who have received at least one dose of the Covid-19 vaccine is slowly climbing amid the rise of the Delta variant, some have firmly made up their minds not to get the shot. Reasons for refusing the vaccine may vary, but one common byproduct has become clear: seriously strained relationships with loved ones on the other side of the heated moral and ideological debate.

The US government confirmed the world’s first case of coronavirus in deer on Friday, adding to the list of animals known to have tested positive for the disease.

The US Department of Agriculture (USDA) reported infections of Sars-CoV-2 in wild white-tailed deer in the state of Ohio, according to a statement on Friday.

We do not know how the deer were exposed to Sars-CoV-2. It’s possible they were exposed through people, the environment, other deer, or another animal species.