At least seven police officers injured amid nationwide demonstrations against government’s COVID containment measures.
Sydney has been in lockdown for two months, while Melbourne and the capital, Canberra, went into lockdown in

More than 250 people protesting against coronavirus lockdowns in Australia have been arrested and many others face fines for defying health orders.

At least seven police officers were treated for injuries after skirmishes broke out at some of the demonstrations on Saturday, which took place in multiple cities nationwide. The largest and most violent protest was in Melbourne. Many were organised by people in encrypted online chat groups. 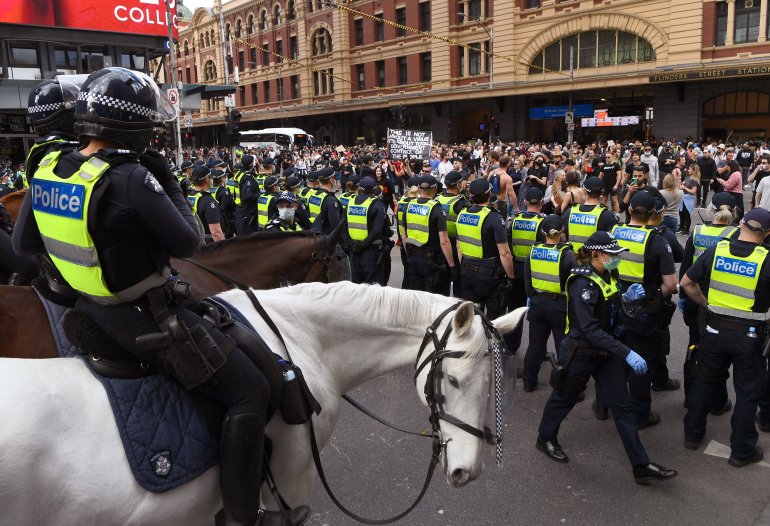 Australia’s Indigenous people face COVID crisis within a crisis
Australia’s Qantas tells employees: no jabs, no jobs
‘Literally a war’: Australia state goes into COVID lockdown
Australian PM approves use of Moderna COVID vaccine
Sydney has been in lockdown for two months while Melbourne and the capital, Canberra, went into lockdown earlier this month. Under the rules of the lockdown, people are mostly confined to their homes and have limits placed on their social interactions.

Protesters say the lockdowns should end, but authorities say they are necessary to suppress the spread of the virus and save lives.

Officers used pepper spray on several people, saying in a statement they were left with no choice [William West/AFP]
In Melbourne, a crowd of about 4,000 mostly unmasked protesters fired off flares, yelled and blasted music in the central city. Victoria state police arrested 218 people and issued more than 200 fines, each for more than 5,400 Australian dollars ($3,850). 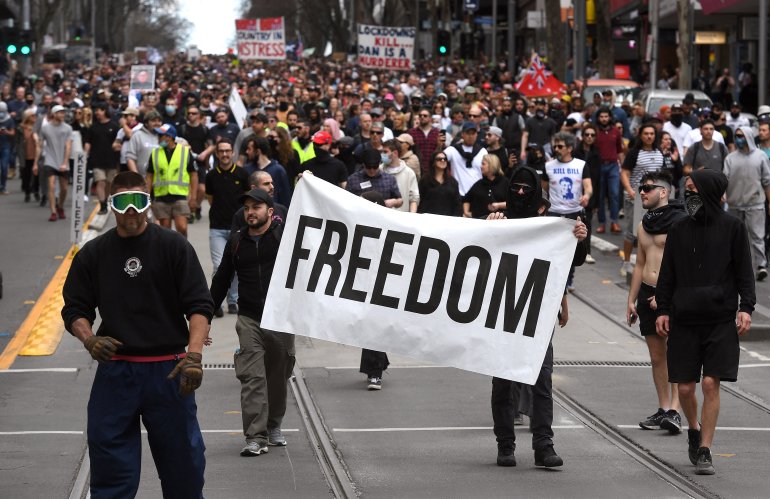 Six Victoria state police officers were hospitalised and three people remained in custody for allegedly assaulting police. Officers used pepper spray on several people, saying in a statement they were left with no choice.

In New South Wales state, police said they arrested 47 people and fined more than 260 in relation to demonstrations across the state. They also issued 137 tickets after stopping about 38,000 vehicles that approached the city.

New South Wales state police said a 32-year-old man who allegedly assaulted an officer was arrested and they expected to file charges. The officer was taken to an area hospital for head and neck injuries.

More than 2,000 people also gathered in Brisbane City Botanic Gardens to rally against the lockdown and vaccine measures, although Queensland state police said they did not make any arrests.