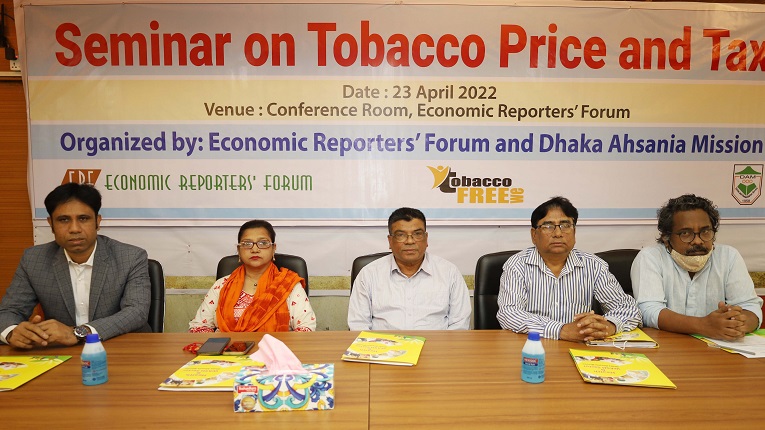 The speakers made the proposal at a seminar on ‘Tobacco Price and Tax’ organized by the private development agency Ahsania Mission Dhaka and the Economic Reporters Forum (ERF) on Saturday (April 23).

At the same time, he proposed to increase the price of low-grade cigarettes from Tk 39 to Tk 50 per ten-bar cigarette and from Tk 63 to Tk 75 per pack of mid-range cigarettes. He also proposed to fix the price per packet of high quality cigarettes.

He said if the proposal is implemented, the government will get revenue. Besides, 13 lakh smokers will be reduced and 9 lakh young people will be discouraged from smoking.

Mokhlesur Rahman, Deputy Director, Dhaka Ahsania Mission, said in his welcome speech that the government has announced to build a tobacco free country by 2040. There is no alternative to raising taxes on cigarettes and other tobacco products to achieve this goal.

Abdus Salam Mia, Grand Manager of CTF, said that tobacco control is essential to fulfill the dream of becoming a developed country. This will reduce poverty and reduce government spending on tobacco-related diseases.

SM Rashidul Islam, general secretary of the ERF, said the government has both crises over tobacco. The government wants to control tobacco, but there is also dependence on the tobacco sector for revenue. However, in order to reduce smoking, the price of cigarettes, especially low-end cigarettes, must be increased. Because 85% of cigarette smokers use low quality cigarettes.