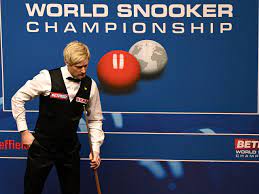 It was Robertson’s fifth career 147 and his first at the World Championship.

He celebrated by raising his arms aloft before Lisowski offered a congratulatory handshake.

The 40-year-old’s memorable break moved him to within one frame of Lisowski, who led 10-9 in the best of 25 frames clash.

The former world number one lifted his only World Championship title in his lone appearance in the final in 2010.

“When he was a boy he used to get tapes sent over to Australia of the great moments here at the World Championship. Now it looks like he is about to offer one of his own,” said David Hendon as Robertson stroked home the final pink – the penultimate ball.
As he fired home the black, Hendon bellowed: “Fantastic! What a moment for the Melbourne man. They’re on their feet at the Crucible, Neil Robertson with a 147.”
One-time Crucible champion Joe Johnson added: “These are very, very special moments, it’s going to live forever.”

Robertson, who had looked out of sorts until his sudden surge to form, capitalised on the momentum to take the next frame to leave the match square at 10-10 heading into the interval in the best-of-25 encounter.

“He likes records, he would have always wanted to make a 147 at the Crucible,” added Jimmy White.
“But prior to that frame, it must be said he was really struggling. [Then] he’s gone in and made a 147, clicked straight back into gear, been playing like he’s been playing for the last few months and went and won the next frame in one visit.”